Close Pilgrim: It’s the Only Way to Stop Entergy from Using the Bay as a Dump 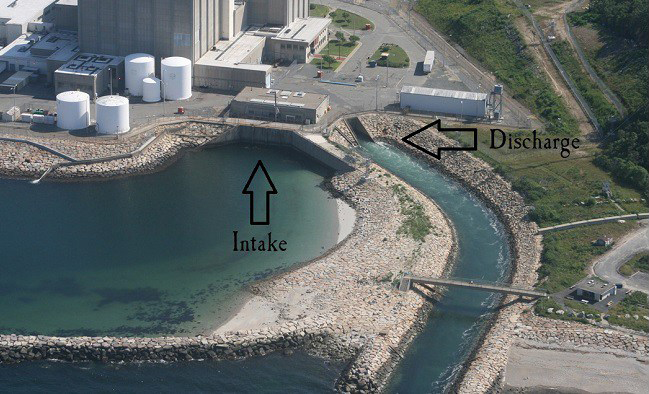 For the past two years, we have been asking state and federal regulators to do their jobs and stop Pilgrim’s damaging pollution. Simply put, they won’t do their jobs. So the only option now seems to be to tell Entergy not to use the Bay at all.

Pilgrim’s thermal pollution means that the facility routinely dumps heated waste water into Cape Cod Bay up to 32⁰F hotter than ambient temperature. During periodic thermal backwashes (to clean pipes and screens, or “macroinvertebrate control”), Pilgrim is allowed to discharge water up to 120⁰F hotter than the Bay. For example, according to Pilgrim’s June 2014 Discharge Monitoring Report, the maximum temperature of the sea water discharged during thermal backwashing operations was 108⁰F. Pilgrim is also leaking sodium nitrite (a corrosion inhibitor and additive to industrial greases) and tolytriazole (a corrosion inhibitor) into the surface waters of Cape Cod Bay.

Last year, the U.S. Environmental Protection Agency (EPA) and the state promised to renew Pilgrim’s permit by the end of 2013, but that promise was broken. Then the agencies said the new permit would be ready by Sept. 2014—and now that promise will be broken again. While Entergy continues to stall and delay the permit process, and regulators cave to industry pressure, our Bay is continuing to be destroyed.

Take action on this issue!

Email or call U.S. Environmental Protection Agency and the Massachusetts Department of Environmental Protection today. Tell them that they have failed to do their job by allowing Pilgrim to operate with a Clean Water Act Permit that has been expired for 18 years and with ongoing leaks of harmful pollutants into our groundwater and surface water. Enough is enough – it’s time EPA renewed Pilgrim’s expired Clean Water Act permit. Otherwise, they need to revoke the permit altogether, see that Pilgrim is closed, and stop the destruction of Cape Cod Bay once and for all.

Send an email or call the following EPA/DEP contacts:

Cape Cod Bay Watch (CCBW) – a program of the Jones River Watershed Association based in Kingston, Massachusetts. Our efforts are dedicated to protecting and restoring the ecosystems of Cape Cod Bay and the Jones River through public education, networking, and advocacy. Find out more at jonesriver.org/ccbw

Gregory Jaczko: “I oversaw the U.S. nuclear power industry. Now I think it should be banned.”

This site uses Akismet to reduce spam. Learn how your comment data is processed.

Save the River, Save the World

Connecting contemporary coastal Massachusetts to its environment since 1985.

Our Mission... to protect, enhance and restore the quality of the natural resources in Southeastern Massachusetts, in particular the Jones River and Cape Cod Bay, for present and future generations, while cultivating effective stewardship of our regional environment through science, advocacy, and education.